So what's up with Brett Kavanaugh and who is he? 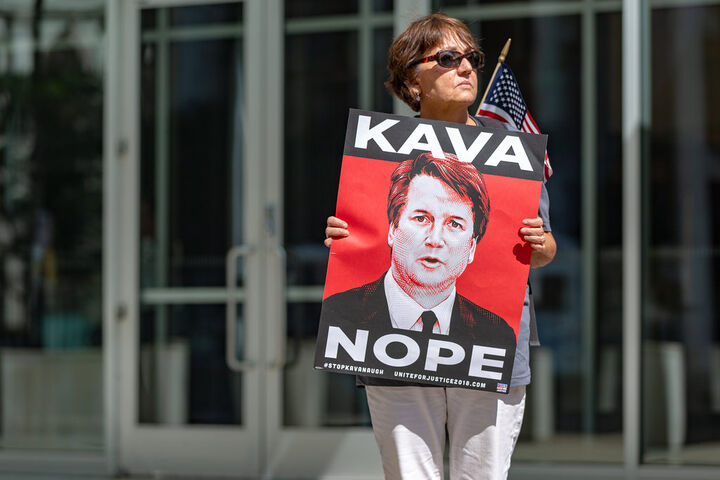 Brett Kavanaugh is an American attorney and jurist who serves as a United States Circuit Judge of the United States Court of Appeals for the District of Columbia Circuit.

He was recently nominated by President Donald Trump on July 9th, 2018 to take place as Supreme Court Judge, which he would serve for a life time appointment. Everyone thought that the nomination was a for sure thing, especially Republicans. However, sexual allegation after sexual allegation came rolling in against Kavanaugh. The first was Christine Blasey Ford, a professor whom he went to high school with. Kavanaugh denied all sexual allegations against him.

On Thursday, there was a hearing for Ford and Kavanaugh, for which they both stated their cases and answered questions. Senators were supposed to cast a vote, for the decision of whether or not they would like to proceed with the nomination of Kavanaugh, despite hearing Ford's story of how Kavanaugh attempted to rape her in high school when he was 17. There are 11 Republican senators and 10 Democrats so the vote was split, leaving one senator to cast his vote. Two women (Ana Maria Archila and Maria Gallagher)  stopped that senator by holding the elevator door open, just before he was about to cast his vote. He had already decided that he was going to vote to proceed with Kavanaugh, but after hearing what they said, he decided it was necessary to call for a week long FBI investigation into the sexual allegations against Kavanaugh.

Listen to the interview with one of the brave women who stopped Senator Jeff Flake of Arizona and demanded to be heard (video in the comments).

I have followed the drama surrounding Kavanaugh quite closely. What bothers me most, is the seeming rush to vote for his approval, trying to avoid anything that can get in the way. It’s frightening that it seems more important to get him there, than to make sure they get the best person for the job.

#2 it is so frightening! Especially because even though he has all of these serious sexual allegations, six now, against him, that are probably true, he shouldn’t be a judge for the simple fact that he was partisan during the hearing. A judge should always act nonpartisan in public and professional life. So that reason alone concludes me to believe he should even be disbarred from his current position.

When I listed to the brave story of the women who stopped the senator, I couldnt help but tear up because they stated the situation very clearly, that if he is cleared for approval, the senators and frankly the governement is telling women everywhere that our voices and gender equality and the autonomy and security of our bodies simply don’t matter.

Yeah, and it’s not about getting a GOOD person for the job but the right person according to them, who is proven to have political bias, as he is Republican, which makes it easier for them to pass the legislation that they want. So in the end this is not about the fact that men who have allegedly perjured himself by lying under oath several times, manipulated the facts, and sexually abused numerous women, should not be appointed to the highest court in the land, but rather just about politics for many (that they want who they want, regardless of how bad a person he is).

None of this is likely to change under the current dicta... regime.

I saw this case trending on Twitter recently, but I didn't really know how to follow due to not knowing a lot about American politics. How important is the Supreme Court Judge?

Similar to the UK, however, from my understanding it is much more difficult to get them removed.

The Supreme Court of the United States (sometimes colloquially referred to by the acronym SCOTUS)[2] is the highest court in the federal judiciary of the United States. Established pursuant to Article III of the U.S. Constitution in 1789, it has original jurisdiction over a small range of cases, such as suits between two or more states, and those involving ambassadors. It also has ultimate (and largely discretionary) appellate jurisdiction over all federal court and state court cases that involve a point of constitutional or statutory law. The Court has the power of judicial review, the ability to invalidate a statute for violating a provision of the Constitution or an executive act for being unlawful.[3] However, it may act only within the context of a case in an area of law over which it has jurisdiction. The Court may decide cases having political overtones, but does not have power to decide nonjusticiable political questions. Each year it agrees to hear about 100–150 of the more than 7,000 cases that it is asked to review.

#7: The “problem” is that US Supreme Court judges are picked for life. No matter how old they get, they can't be removed unless they decide to “abdicate,” which is what Andrew Kennedy did, leaving the spot open for Kavanaugh or someone else. If, for instance, Kavanaugh gets the seat, he is likely to affect the SC decisions for many decades. He's just over 50 now and could live to be 90 or 100. It's pretty essential to get the right people there. And, as I remember, there are only about seven Supreme Court judges, so every single person counts.

There are 8 Supreme Court judges in the US and 12 in the UK. In both countries the positions hold a life tenure. 😊

What an impractical number. I suppose the head judge has a deciding vote.

Right? I suppose 🧐. Oops, there are actually 9 justices in the US. With 8 being associate justices and 1 being the chief justice.

Aha, then they probably thought of that.🙂