I had to share this article from the Daily Mail because whoever wrote it made me giggle!

Specifically this line: "Thirsty influencers have flocked to the ferris wheel and made it a prime spot for their spicy photos." 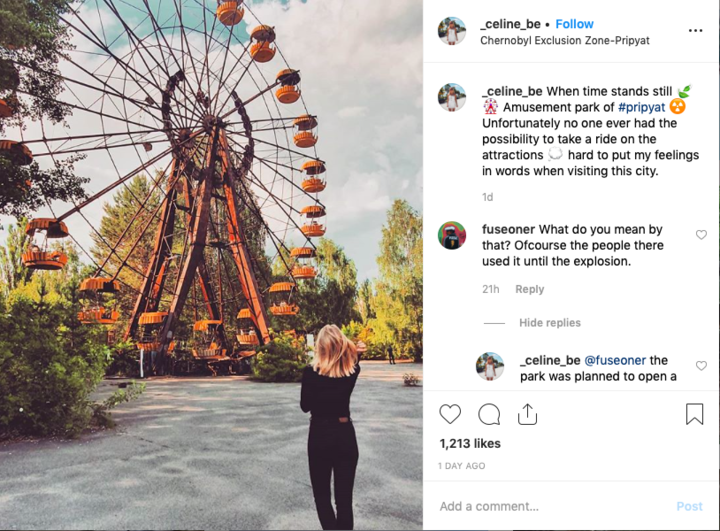 Has anyone watched the series?  I watched a few episodes but never finished it.

I was actually recommended it the other day! Apparently it has one of the highest IMDB scores of all time, so it seems like many people enjoy it!

I'm amazed that it can now be freely accessed and roamed, I remember a Top Gear episode where they were not allowed to leave their cars many years ago!

I watched a couple episodes and it’s good but I think a lot of it hype. I read a fact checking article about it and it stated that they did an amazing job with trying to historicize the story correctly and getting the info right. Although the dialogue is obviously embellished to a certain degree. Some of it isn’t though.

I’m surprised to! I remember growing up and hearing about when I was a kid and I just thought it was the craziest thing and I really really wanted to go for some reason. I remember asking my brother if people are allowed to visit and he said no. I think I was like 7 or 8 at the time. So it must have been back in 1999 or 2000.

I have seen a few people on my Facebook have been recently and I have had quite a few adds pop up for package flights and tours! It is such a unique destination, I reckon that has a big appeal in itself.

I remember the years following the catastrophe. You couldn’t eat wild berries or meat from wild animals in northern Sweden because of the radiation from the radioactive fallout. As I remember it, we got news of heightened radiation levels in Sweden long before the Soviet admitted they were in trouble.

I haven’t seen the HBO series. Not sure if it's for me.

One would think people would be afraid of going there!

Host of Paints and Crafts