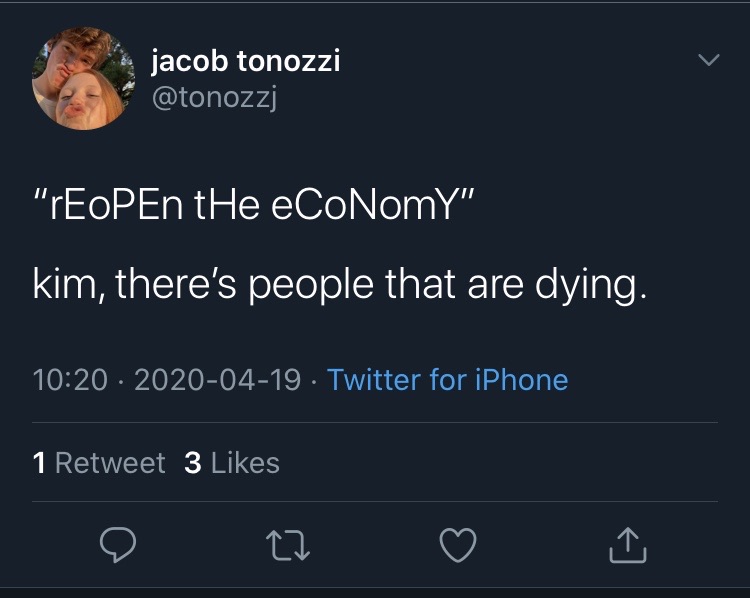 ”Even if you’re not a Kardashian fan, you might still know about the funniest moment in the family’s TV history.

In a 2011 “Keeping Up with the Kardashians” episode set in Bora Bora, Kim lost an uninsured $75,000 earring in the ocean and flipped out. Upon hearing the commotion, her sister Kourtney emerged from a fancy hut holding a toddler on her hip, to say, deadpan, “Kim, there’s people that are dying.”

Those six words became a meme, used to express derision toward anything that feels trivial in comparison to pressing global issues. And now the pandemic has brought it back.

People are literally dying from covid-19 every day — and in response, many social media users are deploying the meme to indicate exasperation toward a message they see as irrelevant, be it political action or product ads. The keywords in the phrase have seen a spike in searches over the past couple months, according to Google Trends.” - The Washington Post

That reminds me of what I, and probably many other Swedes, grew up hearing at the dinner table. Whenever we complained about the food (which was always), my mother used to say something like “think of the children in India,” and later on, “think about the children in Africa.” It was her way of trying to make us remember that we were part of a minority who always had food and everything else we needed, and that not always getting your favorite food for dinner wasn’t really a problem. I used to say that to my kids, too, but more as a joke (that they probably didn’t get because they lacked the back-story).